Zeldin to Address BNP Next Month 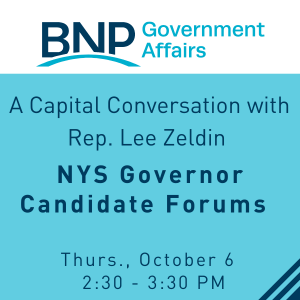 No elected official has more influence on our regional economy than the Governor of New York. As we draw closer to Election Day, the BNP has invited both candidates for New York’s top office – Kathy Hochul and Lee Zeldin -- to speak.

On Thursday, October 6, the BNP is pleased to welcome Congressman Lee Zeldin, the Republican nominee for Governor. Join us as we discuss the main issues facing our state, and Mr. Zeldin’s plans to address them. Learn more and register here.

For over a year, the BNP has warned of a looming unemployment insurance crisis. Because the state failed to act, employers are receiving bills with sharp increases. However, the onset of financial pain has forced lawmakers to take a closer look at the issue, leading more lawmakers to voice support for state intervention. Read Senator Ed Rath’s call for action in the Buffalo News here.

The BNP recently joined many other business organizations around the state in requesting a veto on numerous worker’s compensation-related bills. In a letter to Gov. Hochul, the coalition explained how these bills would send employer costs skyrocketing. The BNP previously raised concerns on this package in a letter last month.

After New York’s second round of primary elections, the candidate slates for November’s general election are finally set. The Southern Tier elected a new Congressman, Joe Sempolinski, who will fill ex-Rep. Tom Reed’s seat until January. In the most hotly-contested race, Nick Langworthy defeated Carl Paladino for the Republican nomination to Congress. Read our full primary analysis here.

The federal government will shut down on October 1st if Congress fails to enact a spending plan for the upcoming fiscal year. So, Congress will spend September debating a continuing resolution to fund the government and avert a shutdown for a few months. By passing a continuing resolution, Congress will punt most of the contentious policy debates until the midterm elections are over. We expect a more pronounced budget battle in December, although the shape of that budget may look very different depending on how the midterm elections go. The BNP will keep you posted with any appropriations news out of Washington.

Using authority granted by the Legislature in 2019, the Farm Laborers Wage Board recommended a 40 hour/week overtime threshold for farm workers, a significant policy shift that would send shockwaves through New York’s agricultural industry. The Hochul Administration will need to approve or deny the recommendation within 45 days.

A gun control package passed by the New York State Legislature earlier this year went into effect on September 1. Learn more about this package here.

The New York State Office of Cannabis Management has begun accepting applications for Conditional Adult-Use Retail Dispensary (CAURD) licenses. Learn more about the process and application on our blog.

This afternoon, Gov. Kathy Hochul gave her State of the State address. In her speech, she outlined her vision for the upcoming legislative session. The Governor’s wide-ranging agenda will touch each industry in some way.

In the waning moments of 2022, Governor Hochul acted on multiple issues of importance.