Two decades ago, many people thought it couldn’t be done. Now, 20 years and thousands of local jobs later, Seneca Gaming Corporation has become an unquestioned engine in the local economy and one of Western New York’s largest employers.

What has this meant for Western New York?

More than 3,000 Western New Yorkers work at Seneca Gaming Corporation’s three casinos, earning more than $220 million in annual wages – money that stays local to pay for houses, groceries, school tuitions and more. The employees live in every community in the region, including approximately 1,000 each in Erie and Niagara County, where they are building lives and futures for themselves and their families.

Of course, running a dynamic 24/7 business doesn’t happen in a vacuum. Seneca Gaming Corporation has business partnerships with hundreds of vendors of every size, including many BNP members, in Western New York and across New York State. Those business relationships translate into hundreds of millions of dollars in annual spending by Seneca Gaming Corporation, purchasing everything from office supplies and playing cards to vehicles and fruits and vegetables. This helps support hundreds – if not thousands – of additional jobs in our region.

Economics only tells part of the story.

The revenues generated by the casinos are a primary source of government funding for the Seneca Nation, which uses those dollars to provide critical services and programs to its people, including healthcare, education funding, Elders benefits, housing benefits, language preservation, and so much more. Without revenues from gaming, these services would not be possible.

The Seneca Nation’s gaming Compact agreement, which made it possible for the Nation to build and operate its casinos, expires in December 2023. To help educate the community on the many economic benefits the Seneca Nation and its businesses provide to Western New York, and the vital role they play for the Seneca people, the Nation launched a public awareness campaign titled #StandWithSeneca earlier this year. With thousands of local jobs, individuals, families and businesses – and the Seneca Nation’s long-term future – dependent on a new, fair gaming Compact, we invite BNP members to learn more about the campaign and what a new Compact means for our region. Visit StandWithSeneca.com. 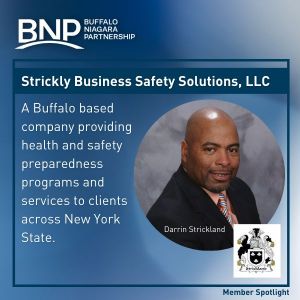 Darrin Strickland is the founder and CEO of Strickly Business Safety Solutions, LLC, a Buffalo-based company providing health and safety preparedness programs and services to clients across New York State. From authorized and certified CPR/AED training and workplace emergency preparedness, to defensive driving courses and babysitter certification, Strickland and his staff help businesses, schools, and individuals be safe and be ready in critical situations. 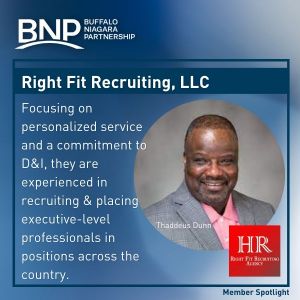 For more than two decades, Thaddeus Dunn has recruited and placed executive-level professionals in positions across the country, in industries from medical and financial to non-profit and education. Now, he has established Right Fit Recruiting, LLC here in Buffalo Niagara, bringing his expertise to the local business community with added measures of personalized service and a commitment to diversity and inclusion in executive roles. 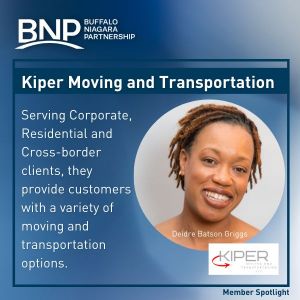 Deidre Batson Griggs is president of Kiper Moving and Transportation, a company she founded with her husband Dante that offers a full range of residential and commercial moving services, including long-distance and international moving. 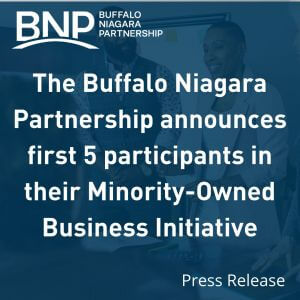 The Buffalo Niagara Partnership (BNP) has a long-standing commitment to promote a diverse and inclusive business climate in the WNY region. To further this commitment, BNP has joined forces with Bank of America and National Grid to create an underwriting fund to sponsor BNP memberships as part of their new Minority-Owned Business Initiative.